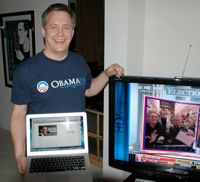 Frank and I had settled in for a long night of watching election returns. We had both arranged to take off work the day after the election, since we figured we’d be up into the wee hours of the morning glued to television and internet. Frank had said numerous times that he thought the election was going to be nail-bitingly close.

And, of course, living in Florida, we feared the worst for the balloting in our own state.

So, there we were on November 4th, 2008, on the couch and all settled in for an evening with CNN and NBC, when right at 11pm Eastern Time – just as the polls closed on the west coast – they called it for Obama. Brian Williams broke the news on NBC, starting with “We are going to have young children in the white house once again…” Barack Obama won by over 300 electoral votes. And with well over 50% of the popular vote. (The final results ended up being 364 electoral votes for Obama, 163 for McCain. The popular vote was 53% Obama, 46% McCain.)

Frank said it was like the end of Star Wars, when Luke blows up the Death Star. “Great shot kid, that was one in a million”. It was exciting and such a huge release. I looked at Frank and said “It’s over. Bush. Cheney. All of the criminals in the white house. The whole shit heap is gonna come crashing down now”.

We listened to the speeches. McCain’s concession speech – which was excellent, no question about it. “If he had talked like that the whole time, he might have won”, Frank said. “Well, that and if he hadn’t picked Palin”, I said in agreement. We both had said we could have lived with McCain as President – but we could not live with the possibility that Sarah Palin might end up in that office should something happen to McCain.

And then the cameras moved to Grant Park in Chicago, an area I know well from my years living in the Windy City. The President-elect looked tired but happy in his acceptance speech that night. It was a moving speech. His family looked so typically American. And then the Bidens came out, and the stage was a mixture of ages and races. As they all gathered together and waved at the crowd, we both smiled. “That’s America”, Frank said. “That’s exactly what it looks like now”. I agreed, adding, “You can’t even tell whose family is whose. There’s just no way to know.”

I could (and have!) listed the many, many reasons why I think Barack Obama should be, and deserved to be, our President. But that night, watching the stage, I think the reason he is our next President was on that stage: He looks like America, circa 2008. His family looks like the families I know. On that stage, I saw black and white adults, black and white kids, and colors that were shades in between. That is America. And that, more than any other reason, is why Barack Obama won.

Now, I’ve followed politics closely ever since the 6th grade, when I had to do a report on Watergate for a Current Events class at A.P. Hill Elementary School in Petersburg, Virginia. That year, when I was eleven years old, I first started to watch the evening news and read the morning newspaper. It was the first year that I read articles in Time magazine. I became fascinated with Richard Nixon that year, and by the time I finished my report, I had grown to loathe him. I felt a tremendous sense of righteous indignation. Ever since then, I’ve had the political bug.

Never in my life has a presidential election affected me as strongly as this election of 2008. I’ve posted articles and links on numerous sites, I’ve written emails to friends and relatives, I’ve donated money, bought t-shirts, bumper stickers, car magnets, and limited edition prints. I tried to attend one of Obama’s rallies, but the forum only held 22,000 people and I was one of the 10,000 left in line outside. I watched every debate. I read articles and blog posts from both sides of the aisles. I watched the Sunday morning talk shows, Anderson Cooper, and Jon Stewart religiously.

I have written here many times about how strongly I feel about learning, and reading, and writing. I am proud beyond reason to have a President who is a man of learning, a man of reading, and a man who has written two books that are not just good, they’re very good. A man who is proud of being “elite” in the best sense of the word. A man who earned his way into two top universities and worked as a professor for 12 years teaching constitutional law. This is the type of man we should be looking up to. This is the type of man who should be President of the United States of America.

So it goes without saying that I am rooting for him big-time. I fervently hope that Barack Obama is a decent and good President. But of course, I have no idea what the future will bring. I don’t know what accomplishments or failures the Obama administration has in store. There will be future scandals, future wars, future economic failures and future crises. And I’m sure there will be a “something-Gate” in Obama’s future as well, probably more than one.

In most of the presidential elections in my lifetime, I’ve voted against someone. Only a few times have I voted for someone. And only this time did I proudly, enthusiastically, and joyfully vote for someone. I have always been proud to be an American, even in her darkest days. But I am especially proud now.

This entry was posted in Politics and tagged 2008 election, Barack Obama, president, president-elect. Bookmark the permalink.