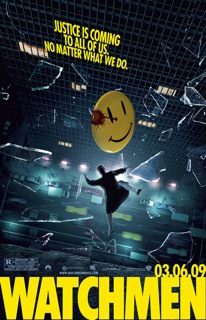 In fact, you can just go ahead and color me surprised, period.

Watchmen (the original comic book, later reprinted as a complete graphic novel) came out beginning in 1986. It was a 12-issue limited run series, written by (at the time) Swamp Thing writer Alan Moore. Now, there had been any number of “limited issue” comic book series by this time: Wolverine 4-issue miniseries, various Secret Wars, and I don’t know how many “X-This” and “X-That”s – but Watchmen was special.

The main thing is that it was a single, self-contained story. It was the first time I had ever read a true, honest-to-god novel in comic book form. In fact, I think Watchmen itself is when I first heard the term “graphic novel” being thrown about. Watchmen wasn’t a part of any other superhero story or set of stories. It didn’t pick up or continue from anything else. Every single character, and its entire internal universe and back story, existed solely within those pages. And when the final, 12th issue came out, that was really and truly The End. No sequels, no “so-and-so didn’t really die” nonsense, none of that. It was one, continuous story, and it was as real and as gritty as possible for a story that was still, after all, about costumed superheroes.

The second thing was that this was an alternate history story. Moore successfully imagined an altered 1940-and-onward history for the world (and especially for the United States), one in which superheroes were real and actually existed. In this world, it’s 1985, and Richard Nixon is serving his 5th term as president (the constitution was never amended to restrict a president to 2 terms in this version of history).”The superman exists, and he’s an American” – Dr. Manhattan, the invincible, indestructible being who can do almost anything, has made sure that the United States has reigned supreme. For example, thanks to Dr. Manhattan, the Viet Nam war ended in one week, and we won. Every tiny detail of this new version of history is interwoven beautifully into every aspect of the story.

By the middle of the series – early 1987 – my friends and I were so hooked on the story that we began showing up at the comic book store (props to The Golden Apple on Melrose Ave in Los Angeles; I hope it’s still there) the day the new issue(s) arrived. And then immediately read them, usually before we got home. I remember reading one issue in my car, parked right outside The Golden Apple. And the day the final issue came out, I practiced unbelievable self-restraint and re-read all of the preceding 11 issues before reading the 12th and final chapter.

To my mind, Watchmen has never been surpassed. Although there have been and continue to be many very good and excellent graphic novels in the years since Watchmen came out, none has ever tried the wholly self-contained concept that was so essential in making this one such a success. Watchmen has influenced many works of fiction that came afterward – not just comic books, but many other forms of entertainment. The whole concept of outlawing superheroes, used in The Incredibles and later by Marvel Comics in their abysmal “Civil War” story line, originated here. The concept of integrating story lines in multiple, simultaneous time frames, so important to the storytelling in Lost and Pulp Fiction, was invented by Alan Moore in Watchmen. Even for those who haven’t read it, its themes and story techniques have become a permanent part of our popular culture.

But I never, ever, thought Watchmen itself would be made into a movie.

For all the reasons it’s such a great read, it seems like an awful idea for a movie. Not connected to any other superhero franchise? No sequel possibilities? It’s set in an alternate version of history? None of the characters ever appeared in anything else? Oh, and it’s an epic spanning over 50 years and two planets, including nuclear war? Let’s not even get into the special effects budget needed to pull this off. Or the fact that most of the characters are not very nice. And several of them die. And one is a rapist. And several others are also murderers. And, oh yeah, the bad guy? He wins at the end.

It also seemed that if anyone did try to film it, it was sure to be awful. So sure, in fact, was writer Alan Moore, that he refused to have his name even appear in the credits of this film. Or even have his name mentioned. He donated all the royalties paid to him for the film to everyone else involved. He refuses even to see the movie.

That’s a shame. Because, to everyone’s surprise including mine, this is a very good movie.

Now, I’ve read a number of reviews that state something along the lines of “this is a movie that did not need to be made”. Which seems kinda silly to me – no movie needs to be made. Compare the absolute piece of crap that was Hancock (which in its own terrible way actually tried to use some of the same themes and elements) to this vivid, engrossing Watchmen, and you’ll see what I mean. I’d much rather see an adaptation of a great novel any day over a crappy original film that was written by a committee of Executive Producers.

Most importantly, Watchmen the movie gets the tone exactly right. It feels like reading the comic book / graphic novel. The casting, to my eye, is superb. Standouts are Jackie Earle Haley as Rorschach, Billy Crudup as Dr. Manhattan, and Jeffrey Dean Morgan as The Comedian. I’ve read a few reviews that have dissed Malin Akerman, who plays Laurie Jupiter / Silk Spectre, but I disagree – I thought she portrayed the character exactly right.

There are Two Big Changes from the graphic novel. The first is that the entire subplot about The Black Freighter, the comic-book-within-the-comic-book, has been dropped. And the second, related to the first, is the new ending. I think it’s important to note that while the new ending is different from the book’s ending, it is exactly the same in tone. In fact, and this may sound a bit heretical to die-hard fans of the book (among which I count myself)… but I actually think the ending in the movie is better than the ending in the book. It ties things together very well, and strengthens the overall themes of the movie, while at the same time seeming a bit more… well, realistic.

Oh, and the opening credit scene is awesome. Snyder managed to distill down dozens of pages of backstory and alternate universe history into a four-minute credit sequence, all set to Bob Dylan‘s The Times They Are A-Changin’. Brilliant.

Honestly, the more I think about it, the more I enjoyed this movie. I may actually go see it a second time in the theater… and that is not something I do very often (well, not often these days, anyway). I saw it with my business partner Donnie Page (who has never read the book) and he also enjoyed it very much. It’s a long film (although only 12 minutes longer than The Dark Knight), and the plot and cast of characters is wide-ranging. There’s a lot of details packed into 2 hours and 43 minutes, so I would make sure you’ve gone to the bathroom before the movie starts, and don’t drink a lot of soda. There are no wasted scenes here, folks. Everything contributes to the plot.

One of my favorite scenes in the book is also one of my favorite scenes in the movie. Near the end, on Mars, Laurie / Silk Spectre is trying to convince Jon / Dr. Manhattan to intervene in the nuclear war that is about to start between the U.S. and the Soviet Union (remember, this is 1985). It’s a famous scene, and rightly so – how does a mortal woman convince a godlike being that she is right and he is wrong? And while the lines are changed somewhat in the movie version – again, to help tie things together a bit better – the scene took my breath away in the same way the scene in the book did.

We’re all miracles, Dr. Manhattan decides. Each and every one of us. Each living human being is so improbable, so astronomically unlikely, that we deserve to live as long as possible. To me, that is the essence of spirituality. And you don’t need a god or God or Dr. Manhattan to figure that out, either.

Who watches the Watchmen? Well, I do. And you should too.