The End of Ambition 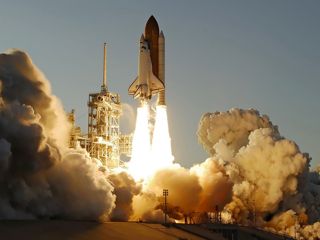 Today I watched the last Space Shuttle lift off, right up the coast from me. Once the Atlantis lands, 9,000 people will be laid off. One man has worked at NASA for over 30 years, and he has worked on every single one of the 135 shuttle launches since the first one in 1981.

It’s been decades since we’ve done anything to build our future. The last big national infrastructure project was the interstate highway system, started in the 1950s. The last big national technology program, manned space flight, ends next week when the Atlantis lands for the last time, and gets shipped off to a museum.

Taxes are the lowest they’ve been in 80 years. But at what cost to our country?

Our train tracks rust. Our highways crumble. Our bridges collapse. Our schools, once the best in the world, rank lower and lower every year against other countries. China builds high-speed railways that whisk its citizens from one city to another at 200 miles an hour. Brazil has managed to make itself completely energy independent, thanks to a massive national program to make biofuels. India has a space program that is rapidly progressing towards full satellite launches and manned missions.

Every other western democracy provides full health care for all its citizens. Many new immigrants to the United States keep a second citizenship, not from loyalty to the country of their birth, but as a hedge in case they get really sick – they can always go home for medical care. Business fail, or never start in the first place, because they can’t provide health care coverage for their employees.

To me, the end of manned space flight is a symbol of everything that is wrong with our country. We have become tight and petty. We care more about keeping the most money in our pockets we can, rather than building a future.

We used to reach for the stars. Now we reach for our wallets and hold on to them tightly, refusing to contribute anything for fear that someone, somewhere, might cheat us. We’ve become a nation of dogs in the manger.

It is said, over and over, that those who do not learn from history are doomed to repeat it. Just look at the history books – the last time we had ridiculously low taxes, no national infrastructure programs, and a culture that didn’t believe in bringing people up from under? The 1920’s. Ending in 1929. The Great Depression. And it took 15 years and a world war to pull our heads back into the sky and start building up again.

But we don’t learn from history, because we’re doing it again. We keep cutting taxes and cutting programs. The rich have more money than they’ve had since the 1920s, while contributing less and less to the country that made their wealth possible in the first place. We cut or eliminate every program that has a chance of building a new future.

We should be building and spending our way towards a new future, not cutting back and screaming “Mine! Mine!”. We should have a million new workers out right now, building new and better highways. Better and faster railways. Newer and more efficient airports. We should rebuild our entire electrical system, to make it more efficient and modern. We should be running fiber optic internet cable to every single resident of the entire country.

And yes, we should have a cutting edge space program, both to give our children something to look up to and admire, as well as to create all the new technologies and companies that will fuel the future. Without Apollo and the manned space program, we would not have the modern computer industry, many new health breakthroughs like MRIs and laser surgery, and literally hundreds of other things. It has been estimated that every dollar we spent on the space program earned back a hundred times that amount in new jobs, technologies, and businesses.

China has a lock on rare earth minerals, vital for computer parts and medical machinery. Why don’t we fund a national space program to mine those minerals from asteroids? We are beholden to countries we hate, because we have to grovel for their oil. Why don’t we start a massive solar satellite power system to build and beam down energy from space? Refining certain pharmaceuticals in centrifuges is phenomenally expensive and time consuming, while the same drugs could be made in zero gravity for pennies. Why don’t we fund a massive medical and pharmaceutical facility in earth orbit for manufacturing such things?

We spent a trillion dollars invading and “rebuilding” a country that never attacked us, and in which we have no national interest. We spent another trillion dollars invading another country and occupying it for 10 years when what we really wanted was to capture a single criminal. Yet our politicians haggle and whine over amounts that don’t even amount to one ten-thousandth of those figures if it has something to do with issues here at home.

One of our political parties cries and whimpers that they won’t even consider raising a single tax on anyone or anything. “We refuse to pay for our country”, they say. “We want all the money for ourselves”. The other political party dithers and waffles, refusing to set goals or an agenda or object to anything. “We’ll just wait and see”, they say. “The future will be whatever it is”.

Everyone who reads this, I beg of you: The next time a politician asks for your vote, don’t ask them how much of your money you get to keep. Ask them how they’re going to build the future. Demand that they look forward, not backward. Tell them to spend every cent they can to make our country the best and the brightest.

In other words… Demand that they reach for the stars.

This entry was posted in Politics, Technology, Thoughts and Comments. Bookmark the permalink.