This is not so much a review as it is a warning.

Beverly Hills Chihuahua is a very slight Disney movie about talking dogs. A spoiled Chihuahua from Beverly Hills (voiced by Drew Barrymore) accidently gets lost in Mexico. She befriends various “street dogs” who help her find her way around. Later, she runs in a band of “Chi-Warriors” who tell her she comes from an ancient breed of Aztec fighting dogs. She has a few more adventures, learns that she is bratty and should be nicer, then goes home. The End.

With that single paragraph review out of the way, you may well wonder: What is the point of this post? Well, it’s mainly about truth in advertising. I’m very used to movie trailers editing scenes in such a way as to make the movie look a lot more exciting than it really is. It’s only natural that filmmakers will use their very best footage, and will assemble it in the most inspiring manner possible, to make a mediocre or even downright bad movie look good. I still remember how I saw the trailer for Star Wars: The Phantom Menace and was sure that it was going to be great.

But… I do expect that what’s shown in the trailer is going to actually be in the movie. In other words, I don’t expect to watch a trailer showing certain actors saying certain lines, and then go see the movie in question… only to find out that those actors aren’t even in the movie, and it’s a completely different subject matter. Everyone with me so far in this? We’re in agreement? OK, then.

About nine months ago, I saw the teaser trailer for Beverly Hills Chihuahua. Now, Frank and I own an incredibly cute, smart, and cuddly Chihuahua named Ricky, so we are suckers for something like this. 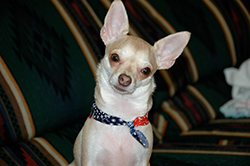 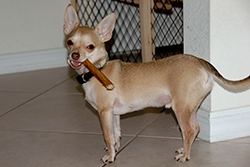 The trailer shows a slew of CGI-enhanced talking and singing Chihuahuas. They’re all dancing around an Aztec pyramid, singing proudly about their breed:

A gang of Chihuahuas is playing instruments, banging drums, and engaging in all kinds of musical shenanigans. Oh boy! A musical Chihuahua movie! And one of the lead dogs actually looks a lot like Ricky! Well, we’re certainly going to see this one.

Then about two months before the movie was released, another trailer came out. This one showed the lead dog Papi, in the same Aztec location as the first trailer, leading a massive army of Chihuahuas in declaring “No Mas!” And then clips from the same musical number. I was surprised they didn’t include some other dance number from the film, but it was still enticing.

The movie was a moderate hit – but there is no way in hell that I was going to see a Disney kid’s movie in the theater. I may like a lot of children’s books and movies, but mass quantities of children in public places I’m not so fond of. So, we waited. And bought the movie on Blu-Ray last week, when it was released for home video.

Well, guess what. Not a single scene from either trailer is in the movie.

That’s right. There are no singing Chihuahuas. No dancing. No musical numbers. No giant Chihuahua statue. Papi never even meets the “Chi-Warriors”, much less leads them in a speech of “No Mas” as seen in the second trailer.

As an adult, I just feel cheated. Ha ha, Disney, you tricked me. But I gotta tell you… if I were a kid, I’d be furious. When I was a kid, if you saw a Disney preview with a singing bear in it, you could be damn sure that the actual movie would have a singing bear in it! (The Jungle Book). If you learned parts of the song from the commercial, you could be assured that the full song would be in the movie. And then harass your parents into buying you the record so you could sing along to it after you watched the movie. And there would be even more songs to sing along to!

Not this. With this trailer, Disney cheats and lies to little children. Pass it on.

So, if you like formulaic stories with talking dogs, go ahead and rent Beverly Hills Chihuahua. But if you were expecting a musical, or at the very least a single musical number as was promised in the preview, then Sorry Charlie. Do not pass “Go”, do not collect $200, go directly to jail.

This entry was posted in Audio Visual. Bookmark the permalink.