We truly live in interesting times.

Thanks to my quick email to a popular blog, I’ve apparently become known as “that crazy guy in Florida who loves ferrets”. This is not an accolade I sought out, I can assure you. Certainly I love my ferret girls and am happy to have them as pets, but I’m far from being a crusader for ferret rights or anything like that. Nevertheless, that’s apparently how I’m being perceived.

On Monday, I was reading Andrew Sullivan’s blog The Daily Dish, a site that I visit several times a day. Sullivan is one of my favorite bloggers, and I’m always interested to hear his take on daily events, as well as see what he’s linking to on any particular day. It so happens that yesterday, he had linked to an article about a poll in San Diego. The title of the link was “Gays vs. Ferrets?”

I followed the link to a rather silly article that summarized the results of the poll. Basically, it says that when surveyed about various topics, the residents of San Diego ranked “Gay Marriage” several percentage points above “Legalizing Ferret Ownership” (ferrets are illegal in California, as well as in Hawaii). The headline read “Gay Marriage now more popular than rodents”.

Those who know me know what a stickler I am about biological classifications and cladistics. What annoyed me about the article was the comment that ferrets are “rodents”, when they are quite clearly not. Ferrets are carnivores, members of the Mustelid family; taxonomically, they’re in between cats and dogs, perhaps a little closer to dogs than cats. Rodents are a completely and totally different class of animal.

In addition, I thought it was pretty funny that the article made it sound like they were actually pitting Gays against Ferrets, when in reality all they were doing was comparing the polling numbers of two completely unrelated questions.

So, I dashed off the following email to Andrew Sullivan on my lunch hour:

Gays versus Ferrets? What am I supposed to do with this information? My partner and I own two ferrets, whom we refer to as “our fuzzy babies”, “the little munchkins”, or simply “The Girls”. Living in Florida, we are prevented from marrying or adopting – but at least they’re not taking our ferrets away from us!

If the poll was based on cuteness, I think my ferrets would probably win, however. You can see them here and judge for yourself. Sad that San Diego expresses its wisdom in endorsing gay marriage, but then displays its ignorance by continuing to ban ferrets.

And by the way, the headline of that article is completely wrong. Ferrets are not rodents, not even close. They are carnivores, same family as minks and raccoons. They’re directly related to both cats and dogs, biologically speaking. Ferrets posses the curiosity and resilience of a cat combined with the rambunctiousness and affection of a dog. They are perfect pets for a fastidious gay couple who like things neat, clean and orderly but who also enjoy a sloppy, furry kiss from an animal when they get home.

I thought it was pretty funny, and I was pleased with myself for coming up with the little double entendre at the end. I sent the email, and forgot all about it.

Until later in the day, when I visited Sullivan’s site again to check on the news… to find that he had quoted almost the entire message, and at that moment, it was the lead item on his web site. Well! I was pretty pleased.

Throughout the day, I got a variety of very nice comments from people who had followed Sullivan’s trackback link to my site, and read about our ferrets Sally and Freddie. To a person, they were all humorous and pleasant comments, including a number from fellow ferret owners.

But not everyone, it seems, felt the same way. Later in the day, I checked Sullivan’s blog again, and found that apparently I’d struck a raw nerve with at least a few people. Sullivan had now posted this message from a vocal ferret critic:

Pace your readers from Florida, ferrets cannot successfully be vaccinated against rabies, and have been recorded on multiple occasions to have gnawed the limbs of small babies, thinking the babies are appropriate prey. Ferrets as pets are illegal in 11 US states and in the City of New York. Several years ago, while I served as associate health commissioner of New York City, I was tasked with dealing with the loonies who styled themselves “Friends of Ferrets.”. David Dinkins’ administration quaked before these animal activists, doubting the wisdom of our orders to euthanize ferrets who had bitten humans. Thank God the Rudy became mayor and in one of his early acts, told the Friends of Ferrets where to put their filthy, smelly and dangerous pet rats.

Sheesh. What a nutball. Not a single true fact in that entire missive. And to top it off, there was that damn “rats/rodents” mixup again. Couldn’t this guy at least checked Wikipedia’s entry on ferrets? I wasn’t going to let it end on a note like that!

So I dashed off the following to Andrew Sullivan:

Well, this debate certainly doesn’t belong on the pages of The Daily Dish, but I cannot be “Fox News’d” by a fellow reader without at least commenting. Feel free to forward this email on to your “associate health commissioner”, and I’ll be happy to carry on this conversation in a more appropriate forum.

Let’s at least get our numbers straight, shall we? Ferrets as pets are illegal in 2 states (California and Hawaii), not 11. In addition, a number of municipalities, such as New York City, have local laws preventing legal ownership of ferrets. Your reader comments on the well-known NYC ban, for example. This has mainly caused controversy because the rest of the state, as well as all surrounding areas, has no such ban – thus causing owners great hardship and consternation during moves.

Like any carnivorous pet, a mistreated or abused ferret can and will bite a human. There was one (and only one, despite urban myths to the contrary) case where a ferret was identified as the culprit in eating a baby’s finger – although New York animal control pointed out that the same household had five cats, three pit bulls, and several large snakes as well… so authorities questioned the automatic presumption that “the ferret did it”. That was the reason the animal was not euthanized in this case.

As far as mistaking a baby for “prey”, this baffles me… Ferrets have been domesticated as hunting animals (much for the same purpose as dachshunds) for thousands of years. They have no natural “prey” of any kind, although their ancestors ate mice and birds. Not much chance of confusing that with a human baby. Ours, for example, will eat nothing except for canned food, no matter what we offer. Our one-year-old nephews plays with both of them all the time, and everyone involved seems to enjoy it. Though my nephew has attempted to bite them several times, they have never bitten him in return. They do lick him a lot, however: 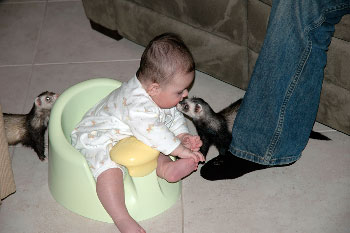 My nephew Ethan plays with Freddie and Sally last Thanksgiving

And then there is the concluding “filthy, smelly, dangerous pet rats” comment… if this (alleged) “associate health commissioner” cannot tell the difference between a rodent (rats, mice, etc) and a carnivorous animal (dogs, cats, ferrets, etc) then perhaps he should reconsider his chosen profession. In addition, ferrets, just like cats, are constantly grooming themselves, and I’ve never seen one with so much as a speck of dirt on it, much less one that could be described as “filthy”. In fact, a ferret will wash itself off in water if they get any type of “filth” on them.

I’m no animal nut; I don’t belong to any ferret group; and I don’t feel the need to beat anyone up over their choice of animal companionship. I’ve had dogs and cats, and I expect to have them again. We got our ferrets after our cat of 17 years died of old age, and we just couldn’t face getting another one just yet. Someone suggested a ferret as a “cross between a cat and a dog”, and it’s worked out well for us. If that’s not your thing, fine. But if someone doesn’t like them, at least say so in a clear and truthful manner. We get enough uninformed opinions in our politics. Can’t we at least talk simple truths when discussing the biological traits of our pets?

And so far, that’s it. I feel I did my part to defend my pets without (hopefully) sounding like a crazy person. And thanks to all the folks who visited my site this week due to the Florida Ferret Freak speaking out on The Daily Dish!

This entry was posted in Politics, Thoughts and Comments. Bookmark the permalink.