Diary of a Wimpy Kid

I like to laugh. I think most people do. Have you ever seen Mary Poppins? There’s a number in that movie called “I Love To Laugh“, with Ed Wynn as Uncle Albert. In the sequence, everyone’s laughing so hard that they float up to the ceiling of the room and have a tea party there. As a child, I thought that was the best scene in the entire movie, and I used to listen to that song on the soundtrack record over and over.

I love to laugh.

And oh man, was I laughing hard over these two books. I read the first volume, Diary of a Wimpy Kid, late at night in bed. Several times I woke Frank up because I was shaking so hard with laughter. I finally had to get out of bed and go sit in another room, so I could finish the book without disturbing him. Or waking up any of the animals with my loud peals of laughter. The second volume, Rodrick Rules, is equally funny.

Diary of a Wimpy Kid purports to be the diary of 7th-grader Greg Heffley. The series originated as a web comic (which it still is, and which you can find here) which went day by day through Greg’s life. The printed versions are rearranged, edited, and updated versions of the web comics, printed in logical sequence and somewhat streamlined. (And with an eye towards avoiding any possible copyright problems: For example, in the web version, Greg reads “Encyclopedia Brown“, a childhood book series familiar to everyone. But in the printed version, it’s been changed to “Sammy Sleuth” so as to not overtly invite lawsuits.)

Author Kinney is primarily a cartoonist. He started the series because he needed a venue to show off his cartoon art, and he didn’t have a portfolio. By necessity, he had to write some material to go with his cartoons, so he came up with the idea of an illustrated journal of a fictional 7th-grader (which I have to assume is at least somewhat based on the author’s real life).

Every page in the books has at least one cartoon, and the whole book is printed as if it’s in a boys’ neat printed lettering. Greg, his best friend Rowley, his evil older brother Rodrick, his painfully annoying younger brother Manny, Mom, Dad, and all the teachers and other kids at school make up the characters.

I understand these books are very popular with the tween set. I’m not sure what it says about me that I found them so funny I practically choked while reading them. Either my sense of humor is extremely juvenile, or I maintain a reassuring dialogue with my inner child. Or, maybe this is just plain funny stuff to anyone of any age.

First of all, let me get something straight: This is a JOURNAL, not a diary. I know what it says on the cover, but when Mom went out to buy this thing I SPECIFICALLY told her to get one that didn’t say “diary” on it.

Great. All I need is for some jerk to catch me carrying this book around and get the wrong idea. 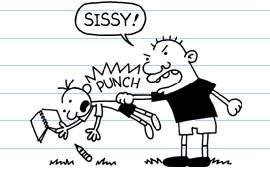 The other thing I want to clear up right away is that this was MOM’s idea, not mine.

But if she thinks I’m going to write down my “feelings” in here or whatever, she’s crazy. So just don’t expect me to be all “Dear Diary” this and “Dear Diary” that.

The only reason I agreed to do this at all is because I figure later on when I’m rich and famous, I’ll have better things to do than answer people’s stupid questions all day long. So this book is gonna come in handy. 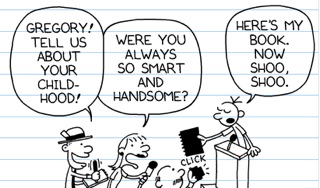 That’s from the first page and a half. Laugh along as Greg runs for class treasurer, since he believes that will allow him to control all the money in the school. Thus he can get the girls on his side and punish the jocks. Or when he and his friend Rowley go trick or treating, even though they’re obviously too old to pull it off. Or when Greg is forced to take part in his school play, “The Wizard of Oz”, as one of the apple trees – only to discover his teacher has written a new song just for them, “We Three Trees”. Or taking drumming lessons from his insolent teenage brother. Or spending the weekend with his clueless Grandfather. And so many, many more.

The cartoon illustrations are hysterical, and if there isn’t a desk calendar of them yet, there should be.

At around $10 a volume, this is some of the most economical laughter you’re going to find in these recessionary times. Kinney has said there will be five volumes total, so I have three more to look forward to.

And remember: Beware of the Cheese Touch.