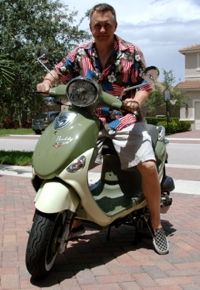 I’m not a motorcycle guy. In fact, the only time in my life I’ve ever ridden a motorcycle was once when I was in high school – I rode my little brother’s cross-country bike for a few hundred feet. It wasn’t for me. In fact, for a very long time, I thought motorcycles of any type were foolish and dangerous instruments of death. My friends in the health care business call them “Donor Cycles” for a good reason.

But about 10 years ago, I started making friends with some people who regularly ride motorcycles. And since moving to South Florida, I’ve met even more. These acquaintances made me realize that motorcycles in and of themselves are no more dangerous than any other vehicle: it’s how they are ridden and how they interact with the other vehicles on the road that makes them dangerous, and that’s why learning the common motorbike accident injuries and what to do if this happen is important to protect yourself. However, while I like and respect the people who ride them, I could never be one of them.

Therefore, I have no justification for why or how I got obsessed with getting a motor scooter.

It started a few months ago. 2008 has been about trying to save on gasoline and energy in general. I bought a hybrid car just before the beginning of the year. Although the Civic Hybrid gets great mileage, I miss the style and pep of my old Mini Cooper greatly. And so the idea of riding a retro-style scooter began to grip me. I remembered that a former colleague of mine, Mike Brady, got a Vespa scooter that I thought was the coolest thing on wheels at the time. I started to see myself driving one of those…

About two months ago I decided to get serious about this. I started visiting local dealers. I went by Honda, since I’d bought one of their cars, but I was underwhelmed with their selection: They had 2 scooters at the very low end (the Metropolitan and the Elite 80), and 1 at the extreme far end (the Silver Wing). Nothing in the middle.

I went to the Vespa dealer in Fort Lauderdale. This was more like it, but the prices ($4500 for the lowest) seemed like an awful lot for something that I intended to be auxiliary transportation. However, the folks at Fort Lauderdale Vespa did help me to understand the ins and outs of a getting a motorcycle license, and gave me a pile of brochures for motorcycle safety training.

My googling for “motor scooters” had turned up a lot of references to the “Buddy” scooter, including a Scooter of the Year award for 2007. The Buddy 125 and Buddy 150, made by the Genuine Scooter Company, sure looked like what I was looking for. And topping out at $3200, the price seemed a lot more in line with what I was willing to pay. I found a dealer near me, the Scooter Superstore of Hollywood, and stopped by to take a look.

And that was it. I had to have one.

Three weeks later – after taking a weekend long motorcycle safety training course, passing both a written and a driving test, getting a new driver license with a Motorcycle Endorsement, AND getting a new credit card (the dealer wouldn’t take Amex, the only card I had) – I drove out of the Scooter Superstore on my brand new, green two-toned “Series Italia” Genuine Buddy 150cc scooter.

My first ride was a 23 mile drive from the dealer to my house. In the pouring rain. Wearing a new helmet, gloves, and jacket for the first time.

I had a blast.

At the moment, I’ve got 285 miles on the Buddy, and I’ve filled it with gas 3 times. Each time, I’ve spent less than $5.00 for a tank of gas. My average mileage (well, of course I keep detailed records in a spreadsheet!) is 91 miles per gallon. My top speed has been just a hair over 65 miles an hour, when there was no one around and I just wanted to see how far the throttle would go. And no, I’m not planning on taking it on the freeway.

I’ve ridden the Buddy to work 3 times so far, and I’ve driven it to most of my regular places. This past Saturday, I sold my car (since I am getting a new one on order in a few weeks) and the Buddy is now my sole means of transportation – at least until my new Mini Cooper arrives.

This little scoot has put its hooks into me deep. I’ve been consulting the Modern Buddy forum daily, I’ve ordered a pair of specialty riding boots, and I’m waiting for my Kevlar shirt so I don’t have to wear my mesh armored jacket in the current hot and humid weather here in Broward County. And I’ll probably write up a review of my Bluetooth-enabled Nolan helmet, which lets me talk on my iPhone while keeping both hands on the “wheel”.

I’m sure I’ll have more to say, although I’ll probably say most of it on the Modern Buddy forum, rather than on this blog. But if you’re trying to think of a way to save on gas… and still have an enjoyable ride… you need to get yourself a new buddy. A Genuine Buddy.

And no, you can’t have mine.

This entry was posted in Uncategorized and tagged Buddy, geniune scooter company, scooter. Bookmark the permalink.